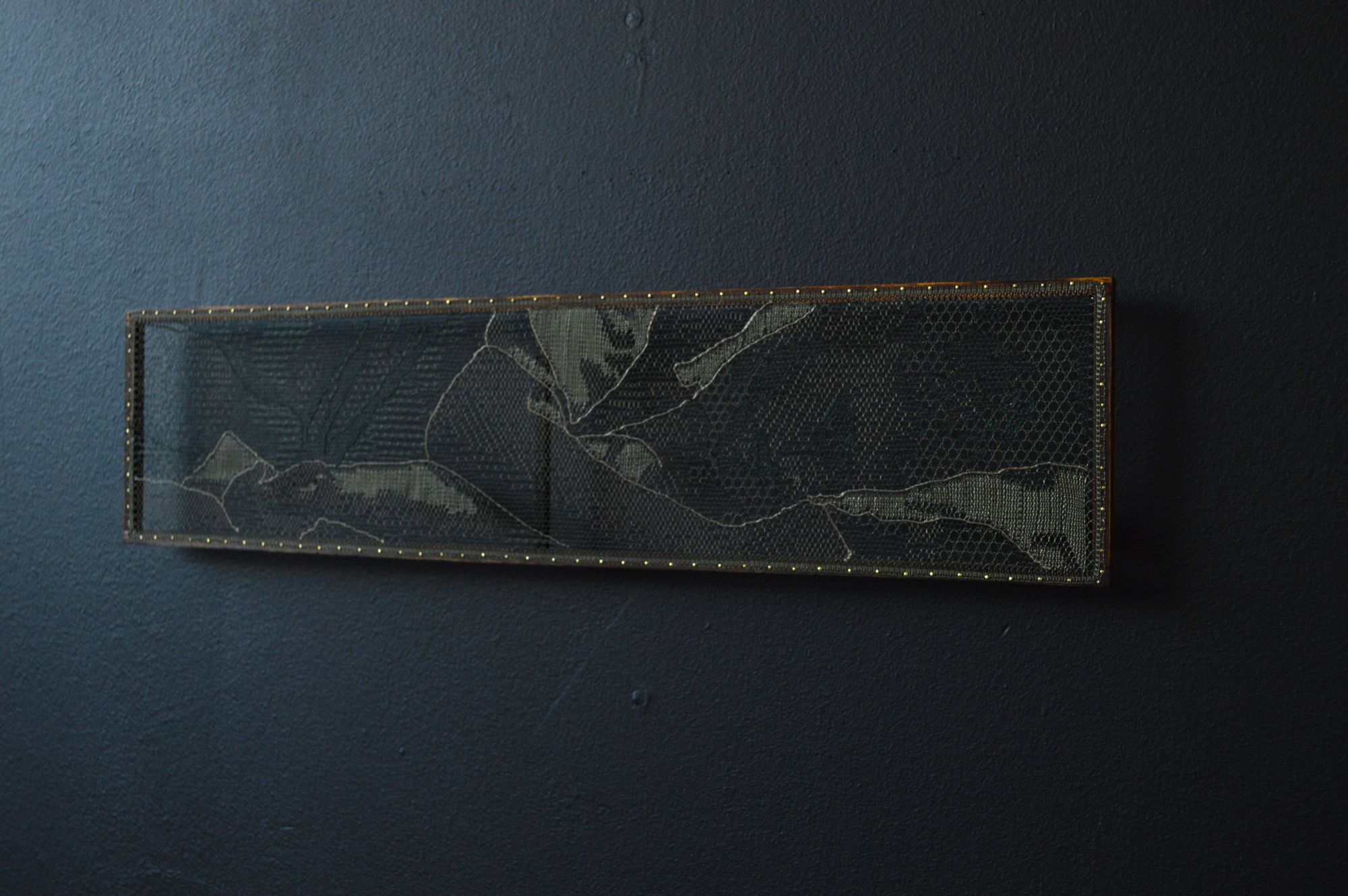 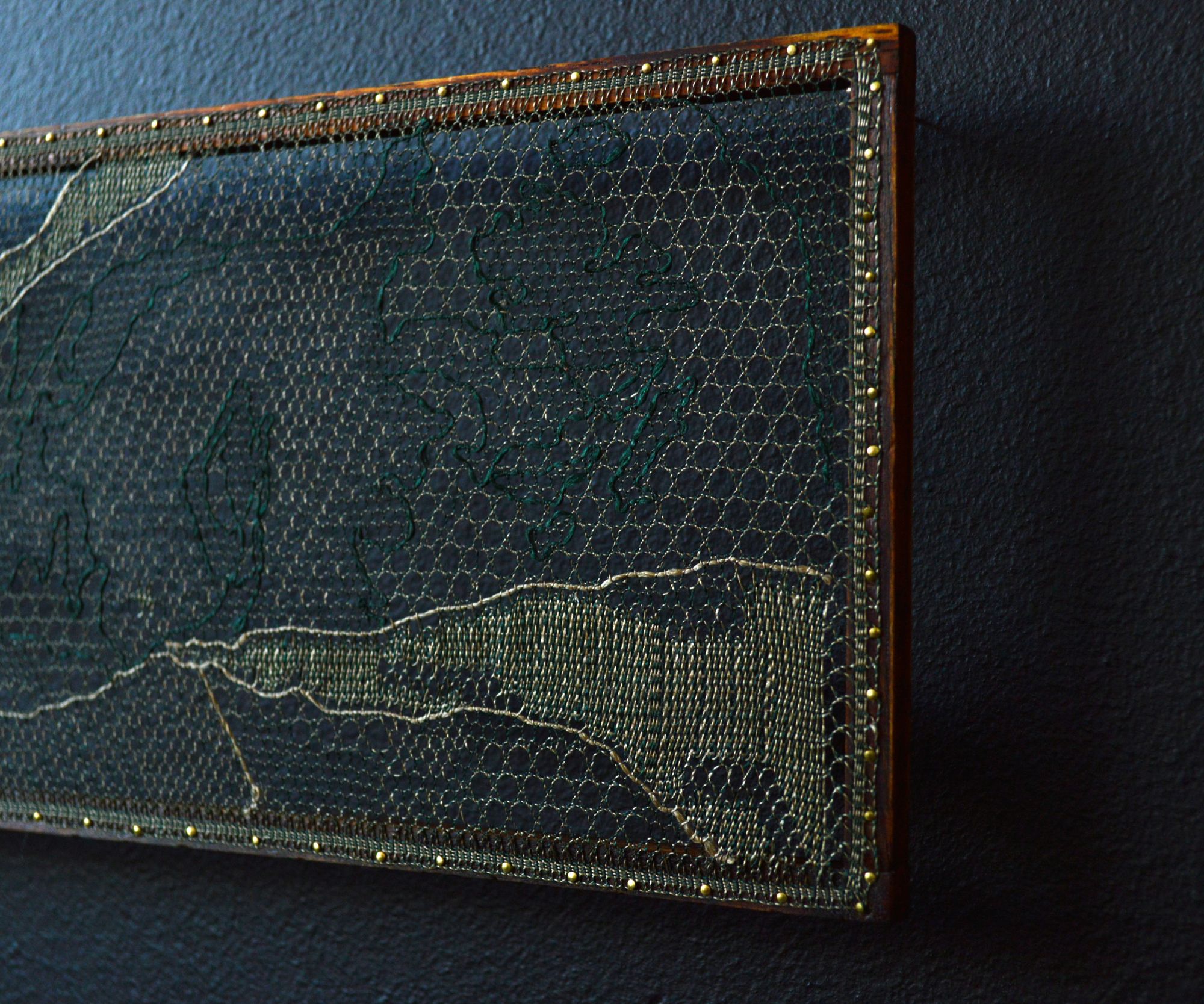 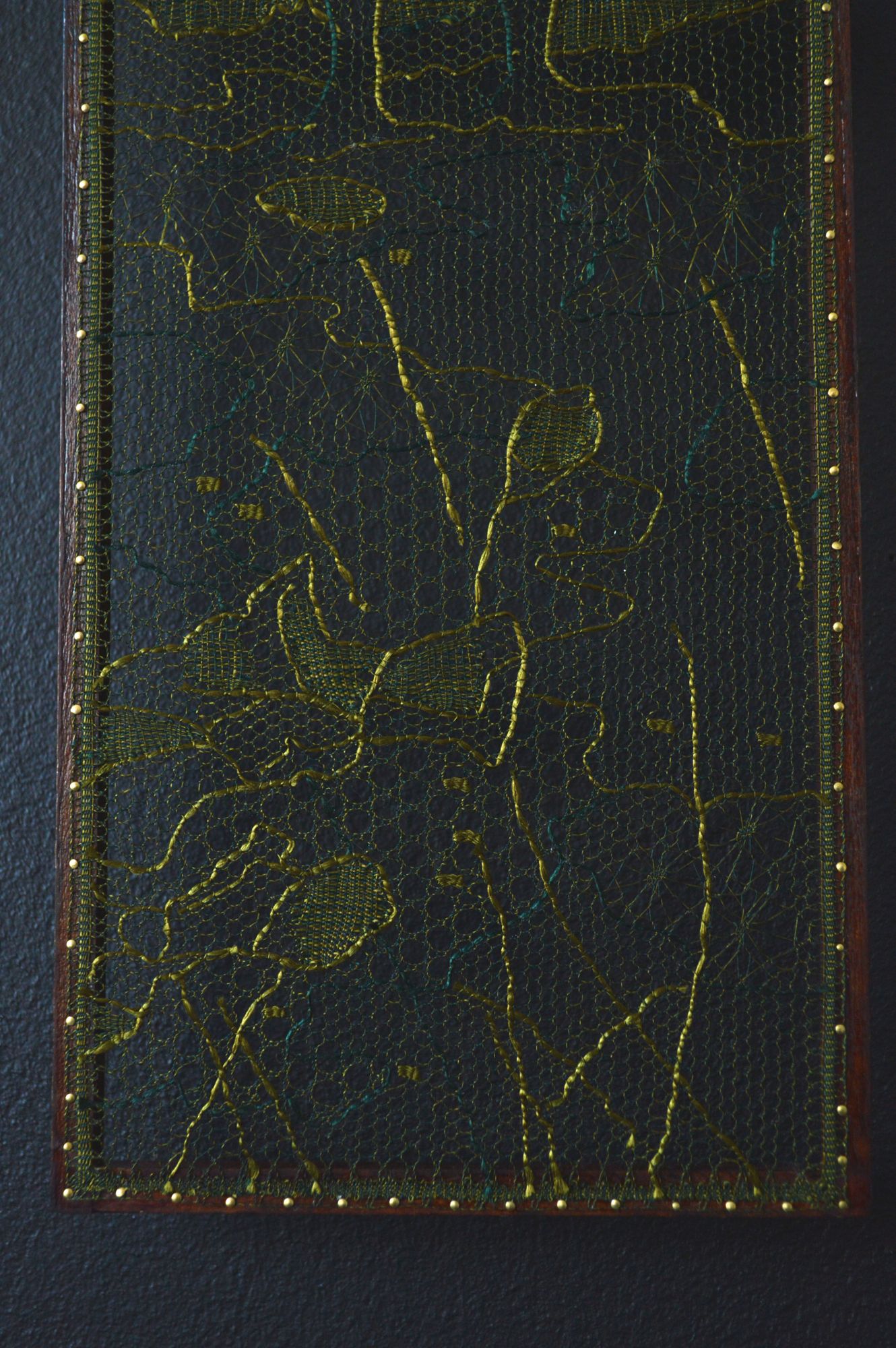 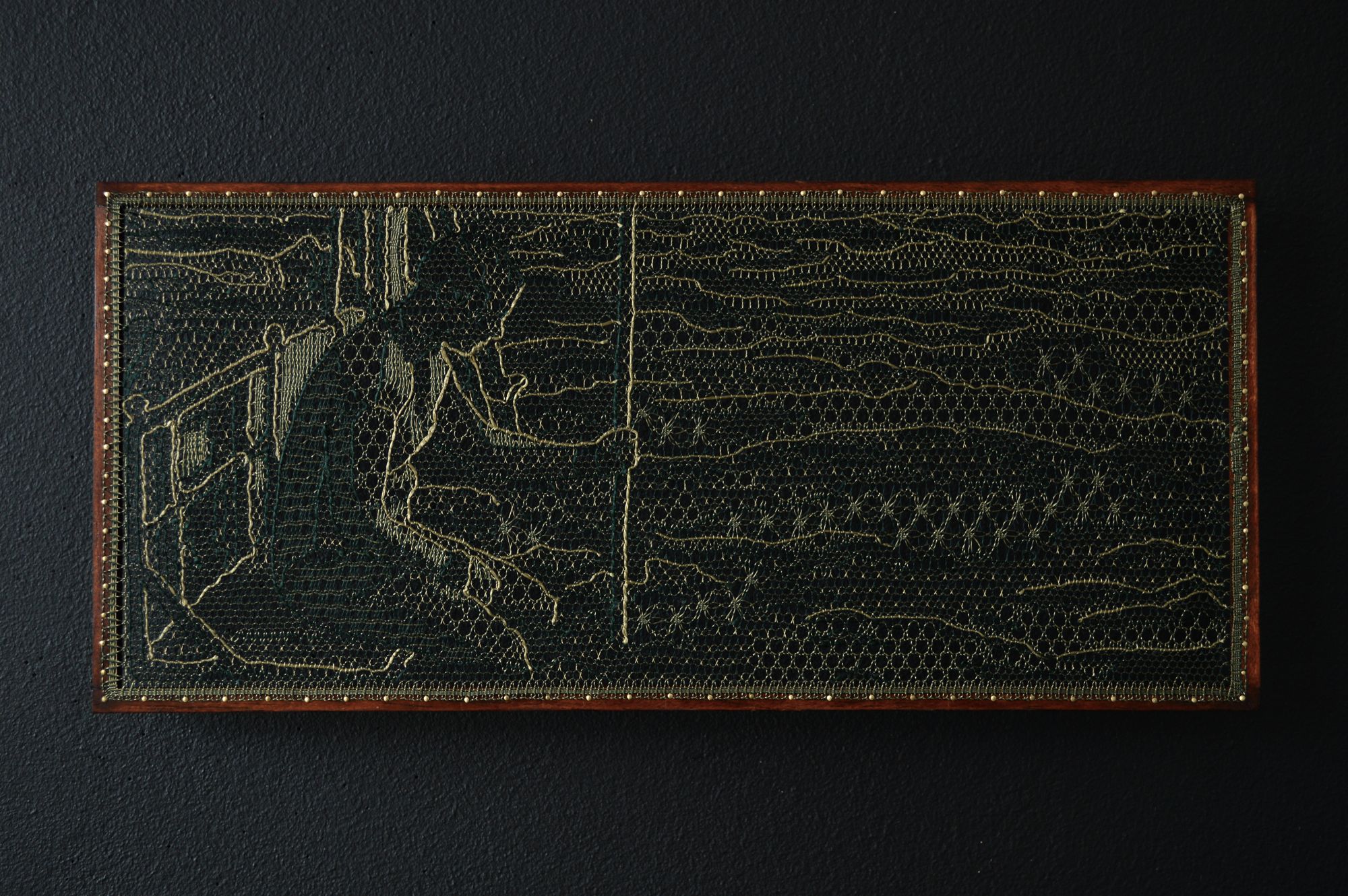 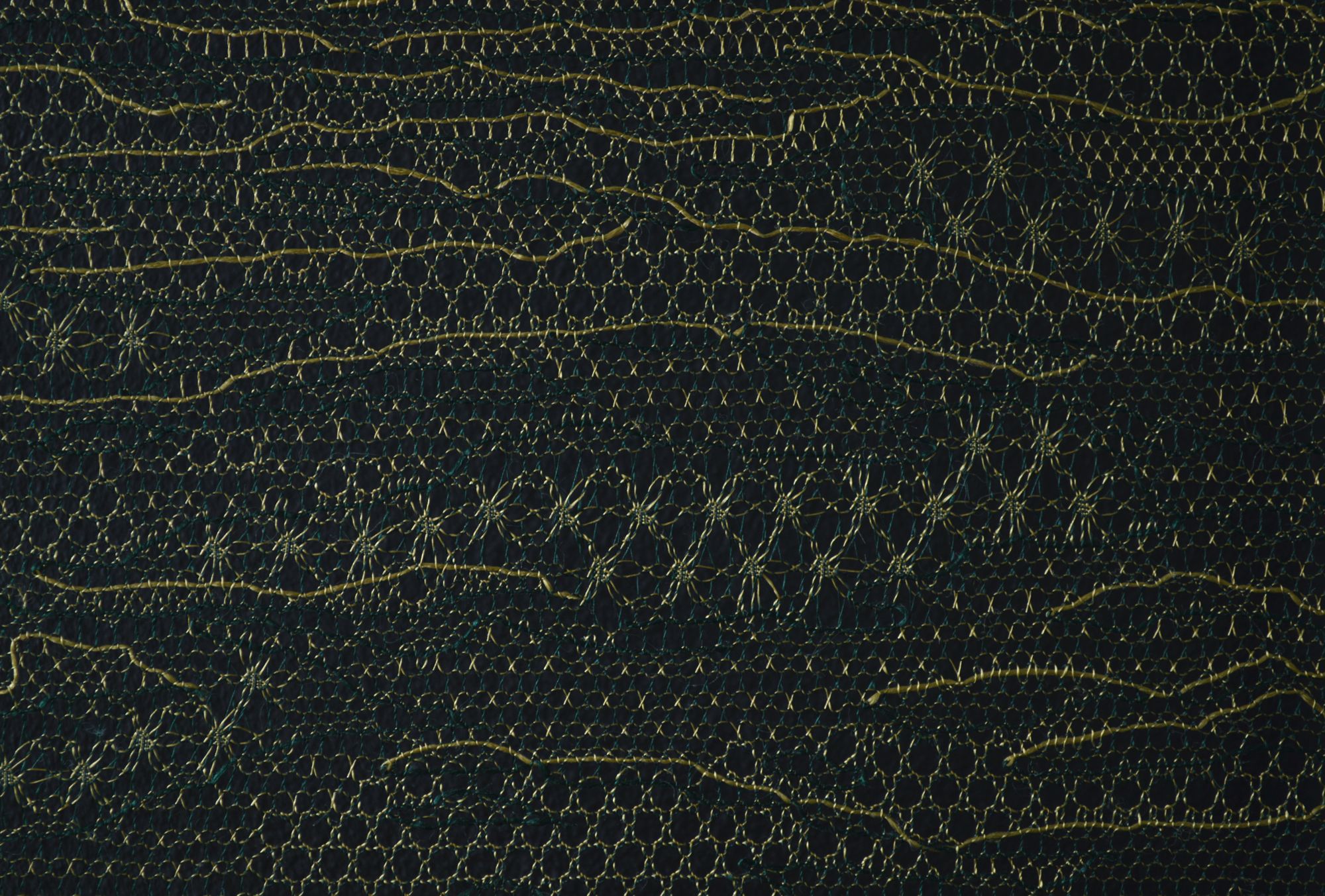 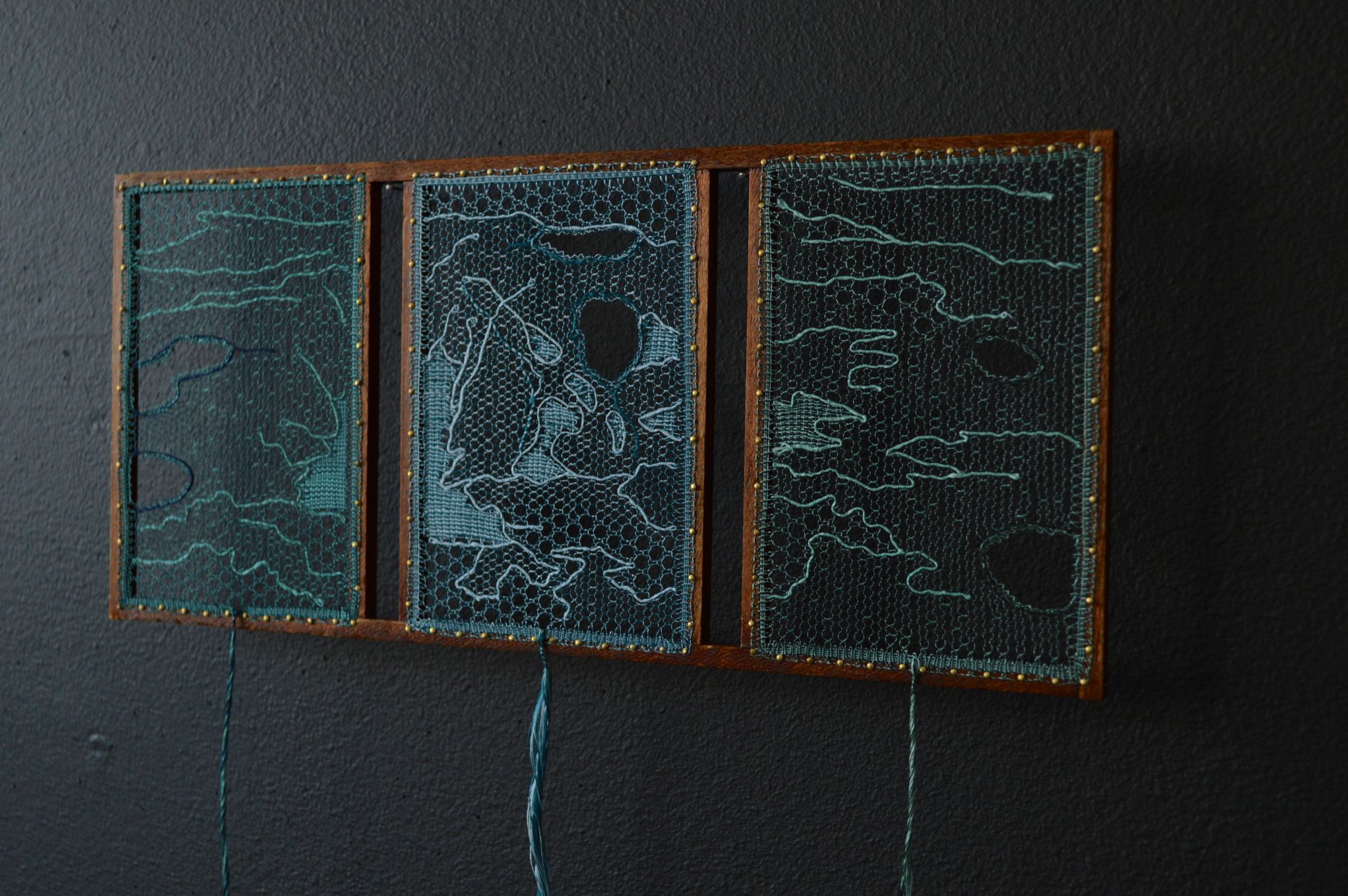 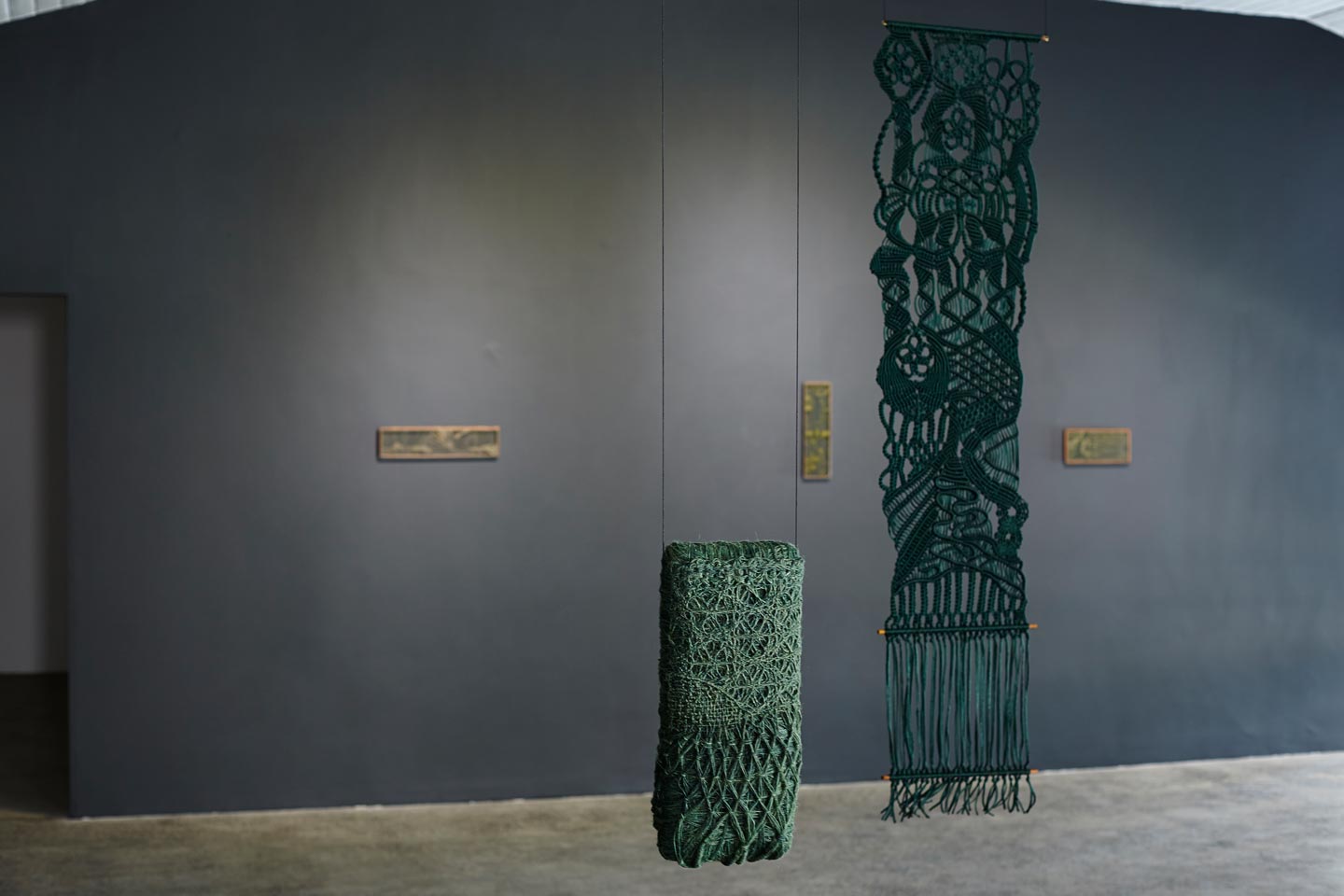 Pierre Fouché. The Fallen and the Drowned [Installation view with the silk lace works in the background]. 2015. Whatiftheworld Gallery. Cape Town 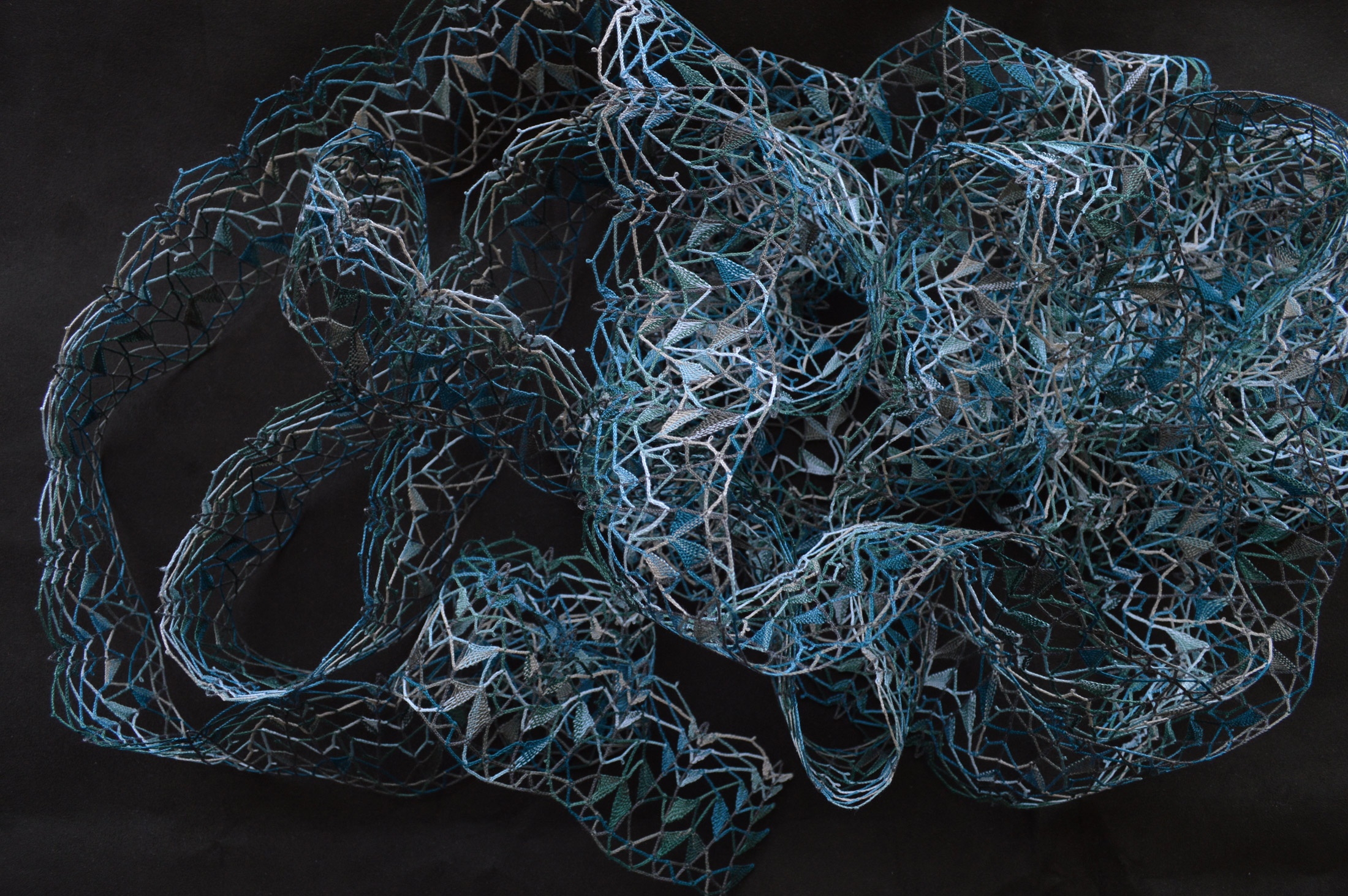 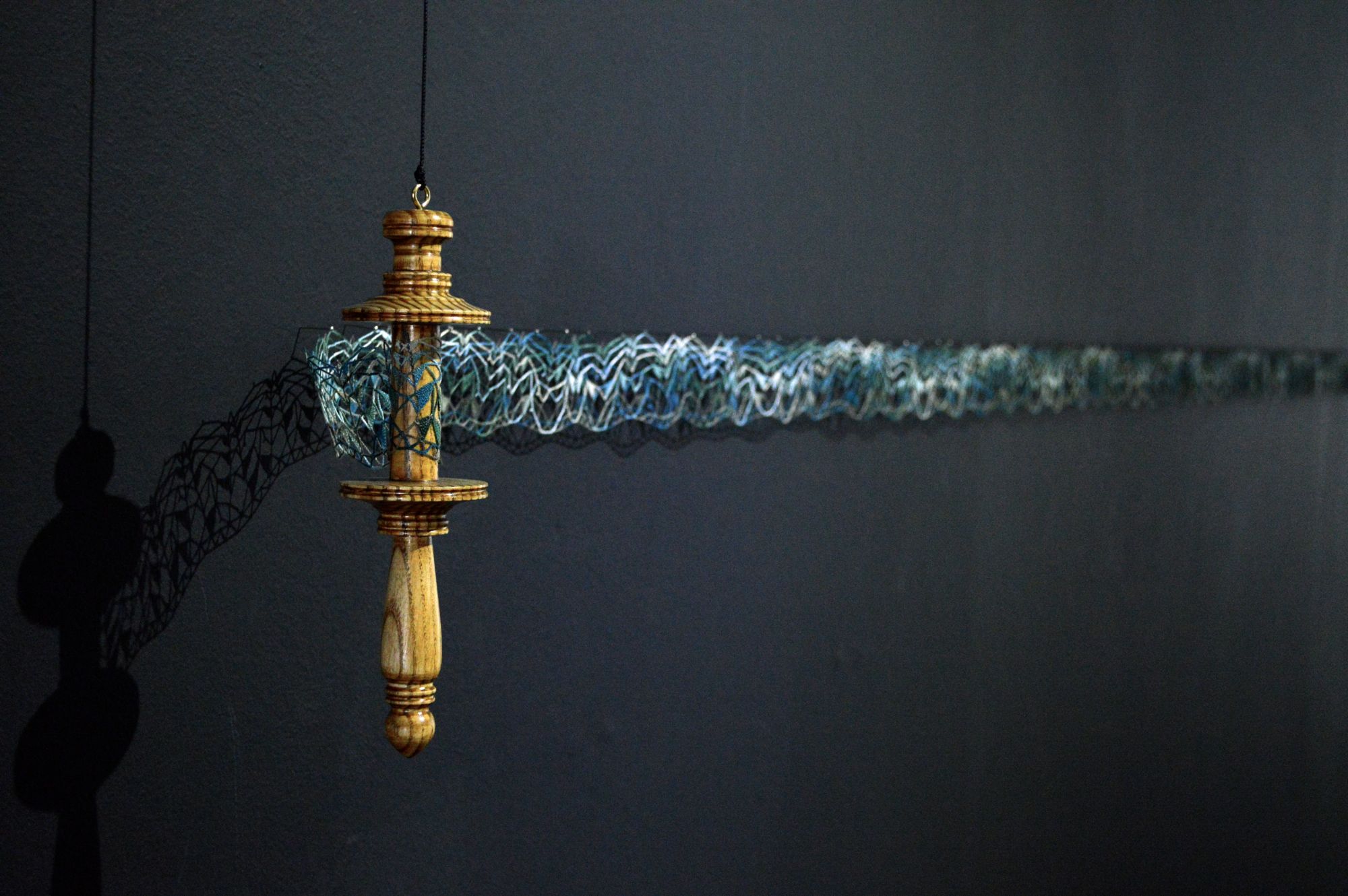 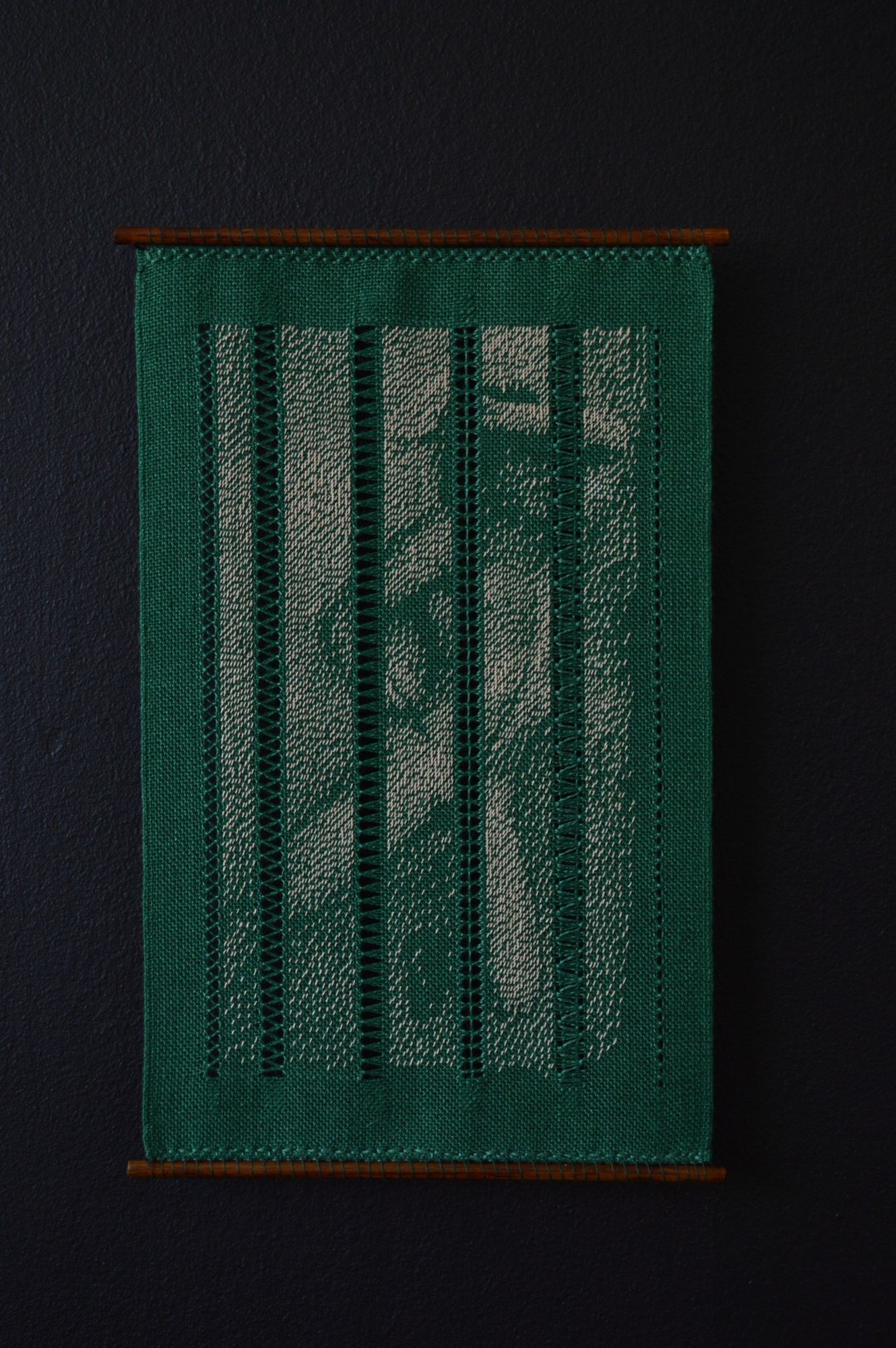 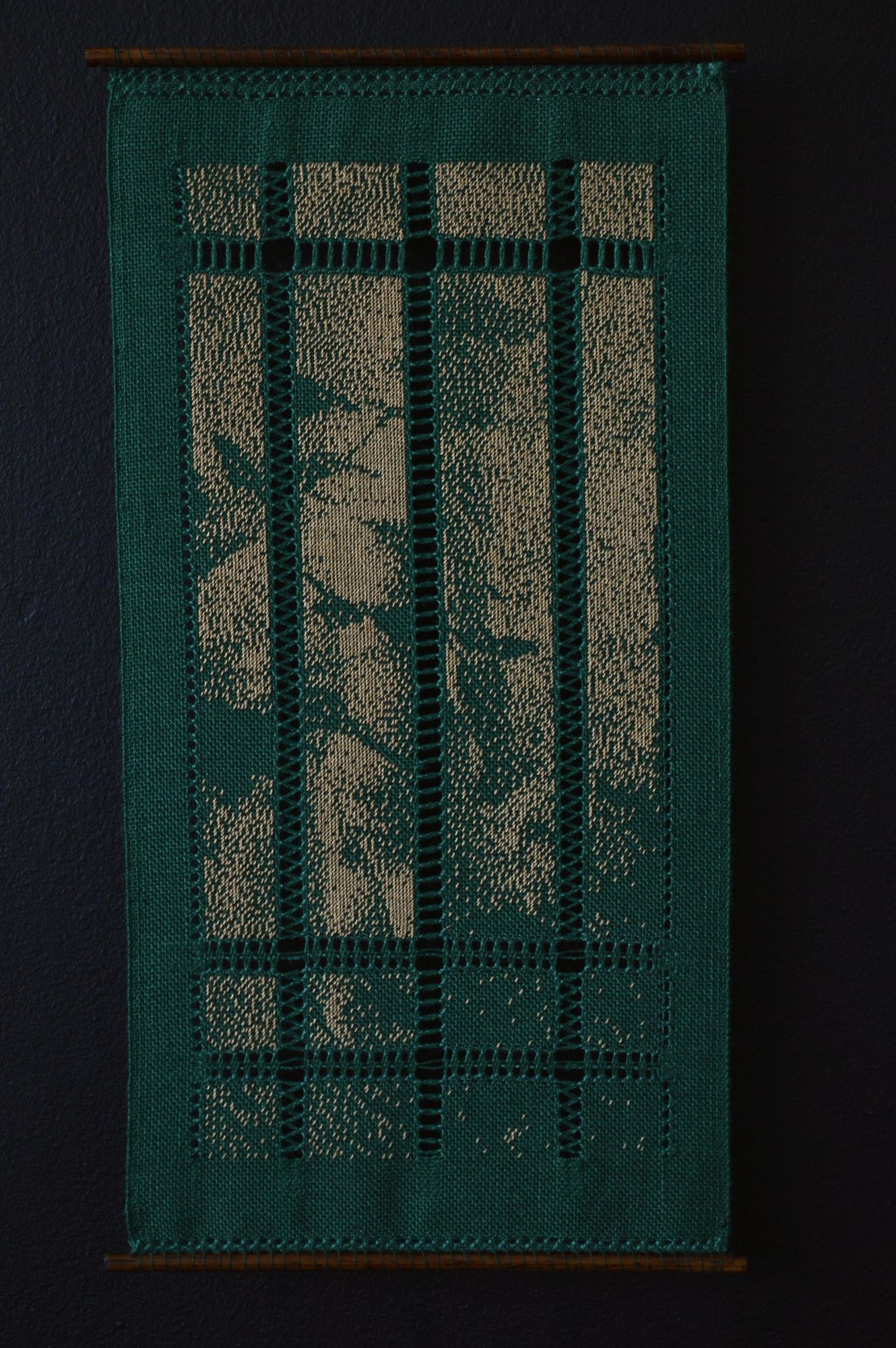 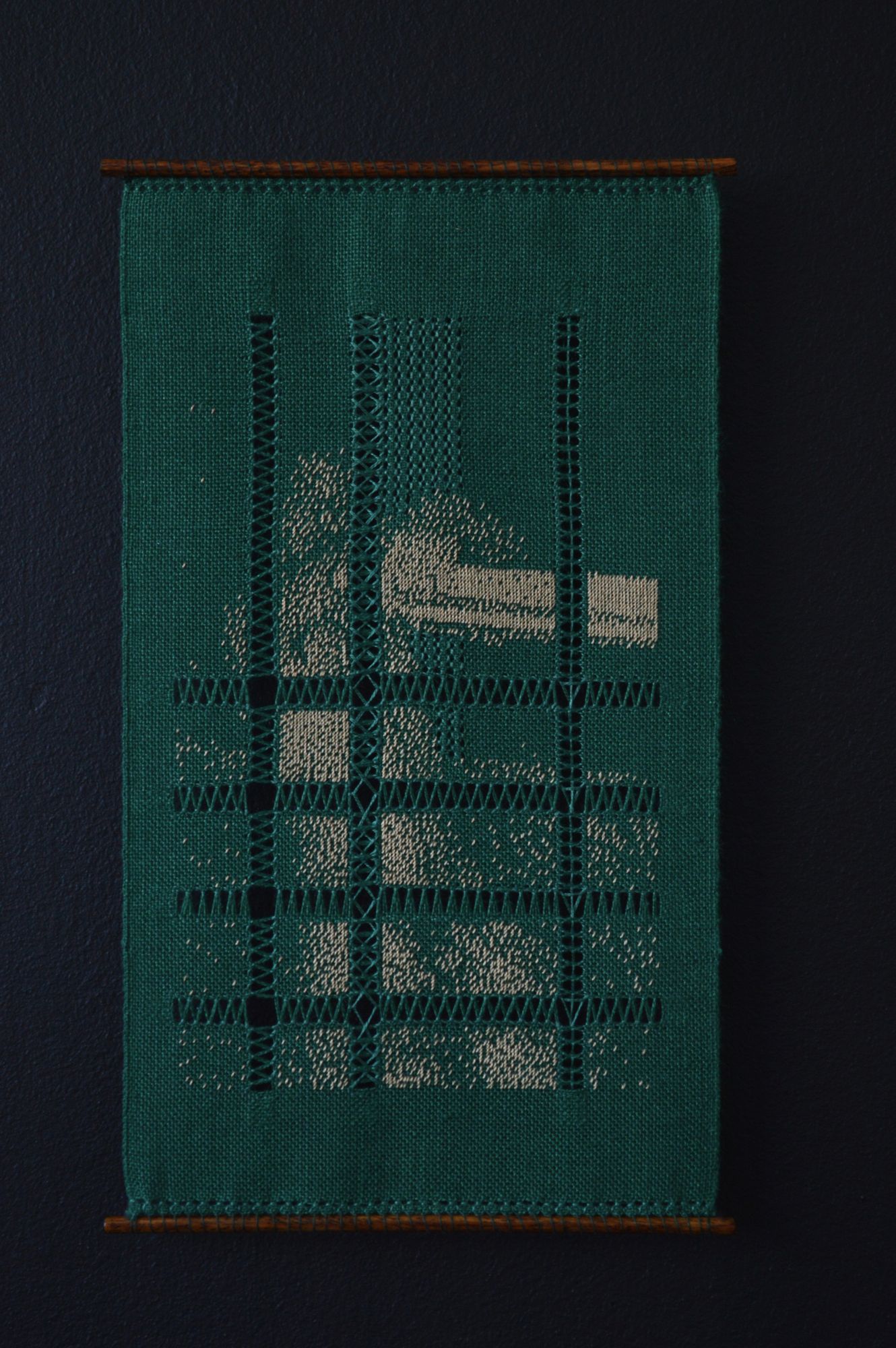 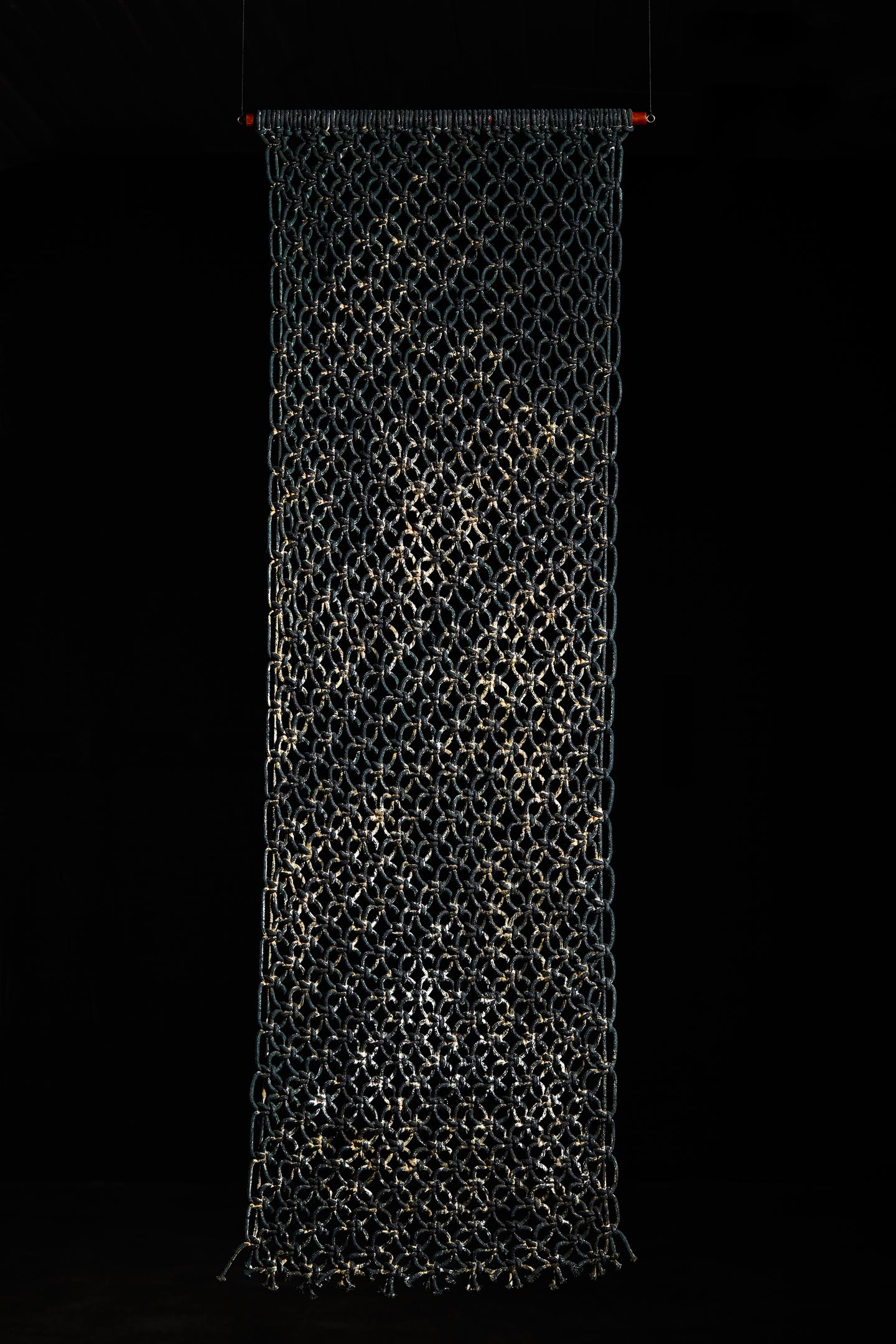 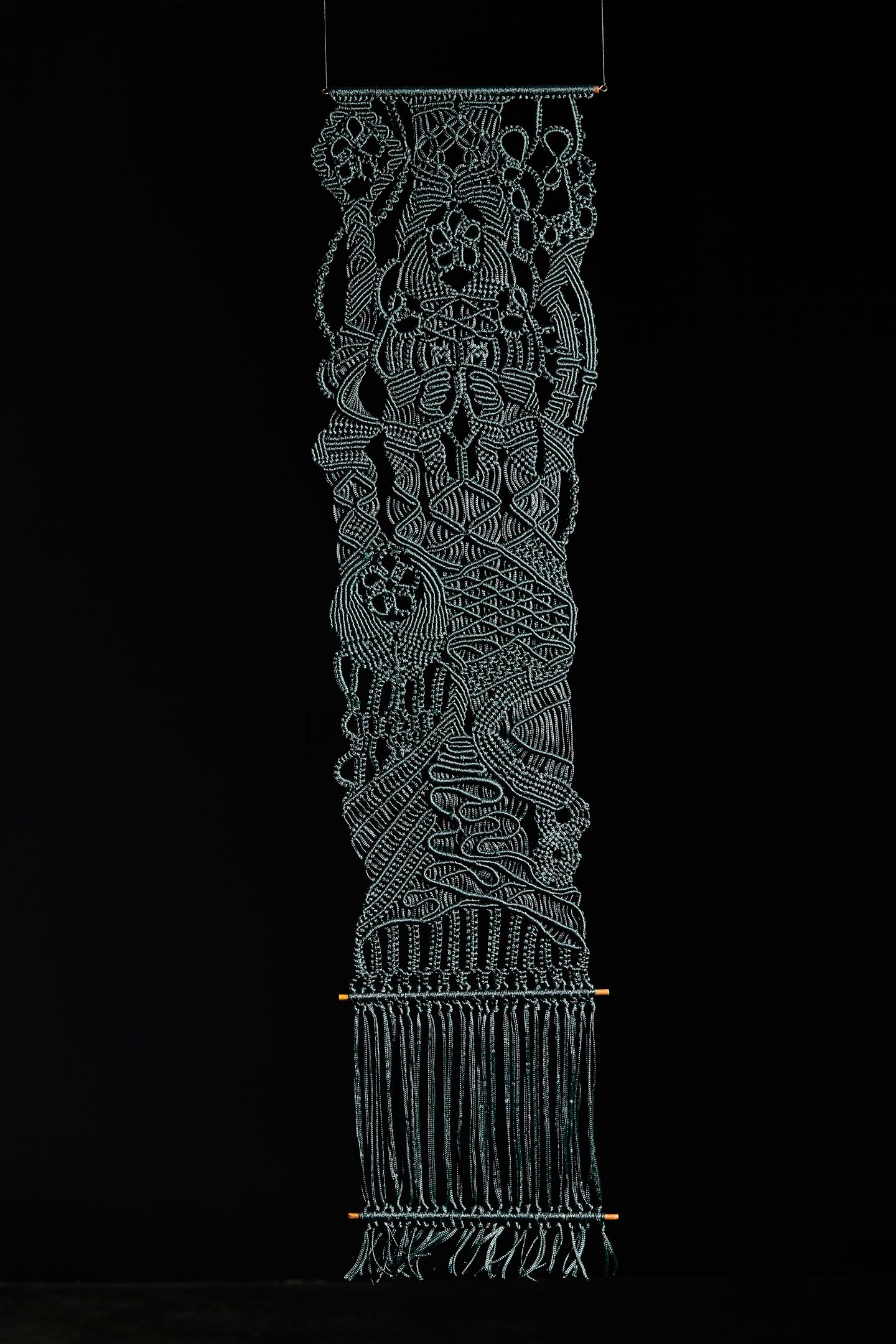 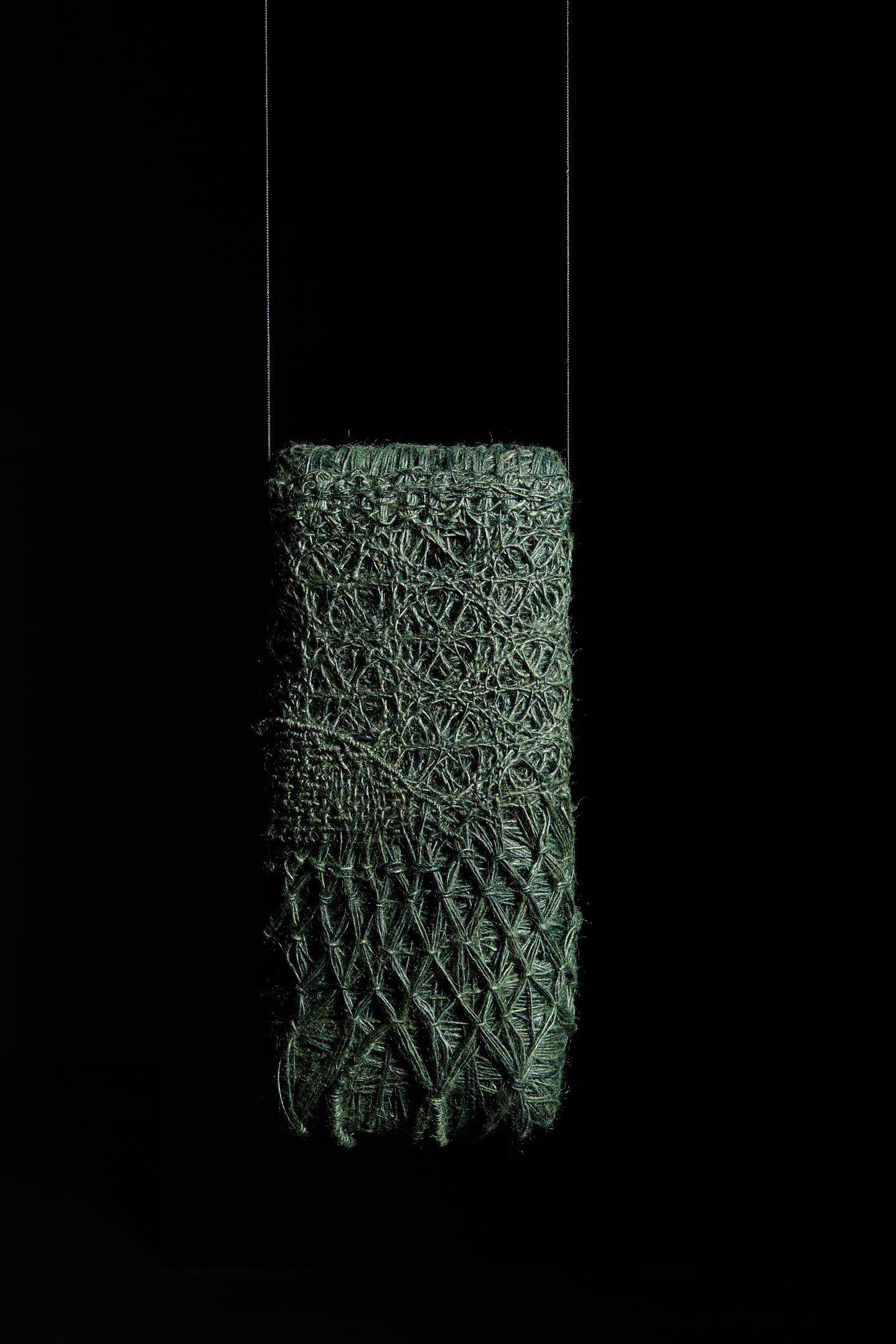 The Fallen and the Drowned is an exhibition of intimately scaled laces, embroideries, drawings and video in which I reveled in the traditional materials and formats of the techniques I employed, as well as the techniques' optical and narrative potential.

The three point ground bobbin lace panels in silk floss that comprise the main works of the exhibition focus on a particular mechanic of contemporary representation: the indirect portrait. The figurative lace panels are based on personal memento images of highly disparate origins: a news web portal, a social media gallery, a film. I subsequently rendered the appropriated images of figures in landscapes into delicate point ground laces constructed with silk floss in two contrasting colours each. The singular first name titles, combined with the optical, geometric and organic complexity of the works allude to the frailty of intimate relationships and the wealth of representations that interweave and define them.

The Mixture of Frailties – series of pulled – and drawn thread embroideries expand the male nude’s contemporary incarnation as object with the anguished and fearless desire of exhibitionism. As such, they become the shadow of the more romantic lace portraits. The pointillist reverse blackwork embroidery technique reminds of the origins of the first digital imagery, the bitmap erotica, viewed on monochrome screens, which introduced my generation to sex. The image series gradually disintegrates. With bands of intersecting canvas threads removed from the ground incrementally through the series, I subjected the embroidered images to a ritualized and aesthetisized manual form of jpeg disintegration.

A visually prominent work in the exhibition is a 6,4m long cotton braid lace scroll His foam white arms (introduced as a work in progress during my 2012 solo exhibition These Waves) in which a queered fragment of Crosbie Garstin’s epic poem "The Ballad of the Royal Ann" is encoded in the design of the pattern. The text fragment relates a sailor’s seduction by the sea as personified by an alluring young man. This seduction leads to his death by drowning. The pattern for the continuous edging is based on the shape and configuration of the frill shark’s teeth.

The ‘figure in the landscape’ returns in the reverse graphite drawings on black paper and a pinhole photography slideshow video, but with the figure implied by the location of the landscape. The drawings are based on close up photographs of shrubs and walkways of Solitude Park on along the Rhine’s banks in Basel, and the hike route towards Sandy Bay on the greater Cape Town Atlantic seaboard.

I exploited the optical effect of graphite on a dark ground – its reflective quality increases with the low contrast, resulting in a landscape that appears and disappears in relation to a moving viewer and a single light source, like a face in the dark, temporarily illuminated by the flame of a cigarette being lit. The primitive optics of the pinhole photography slideshow, on the other hand, frame a journey from the start of the walking route to the beach destination and beyond into a maze of trees and bushes. The slideshow video is inspired by Kung Wang Huang’s 1347 scroll "Dwelling in the Fu-ch’un Mountains", and aims to becomes a similar ‘scroll’ where the succession of landscapes implies a moving observer. This is no leisurely stroll, however: the speed of the editing implies a predator-like point of view.

The body of work concludes with abstract rope, braid and twine panels. Executed without pattern or planning, these works indicate a shift from the others’ figuration and textuality to the realms of intuition and form. I treated a cotton rope macramé panel as if a canvas to attack with paint and chemicals, while the freeform potential of the knotting technique in the second polyester braid panel is a quieter undulation of random patterns. The final hemp object is folded, bound, wrapped as if concealing something. These works are the logical conclusion of the darker undertones of the other works: the means to express that which cannot be articulated by language or figuration without censure.

"The Fallen and the Drowned" was exhibited at Whatiftheworld Gallery, Cape Town, 4 February - 11 April 2015