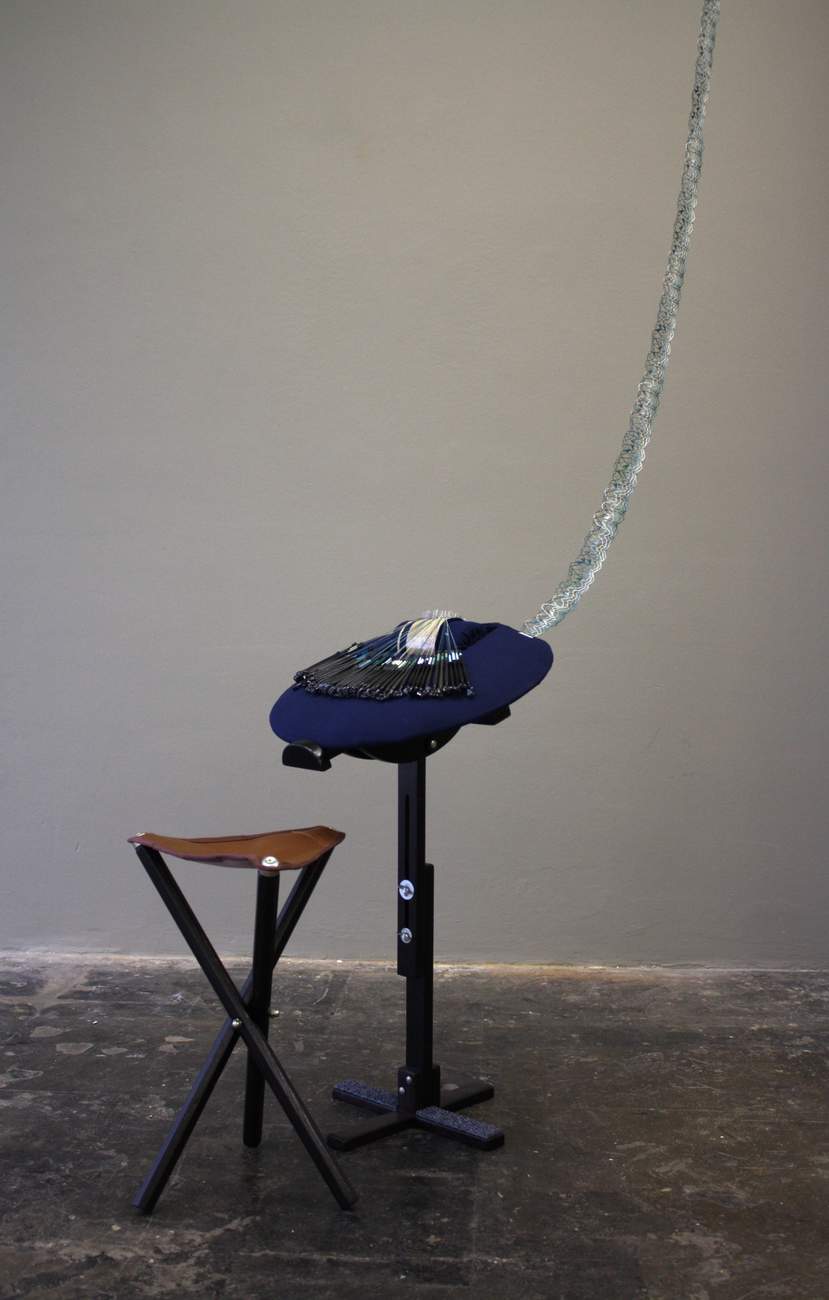 Pierre Fouché. His foam-white arms go over and round me. 2012. Bobbin lace edging with a Morse coded text woven in. Cotton, lace pillow & stand, hassock, gold kiss-cut vinyl lettering, wooden bobbins spangled with glass & lapis lazuli. Installation dimensions variable. [The result of this work in progress-installation formed part of the following exhibition "The fallen and the drowned"] 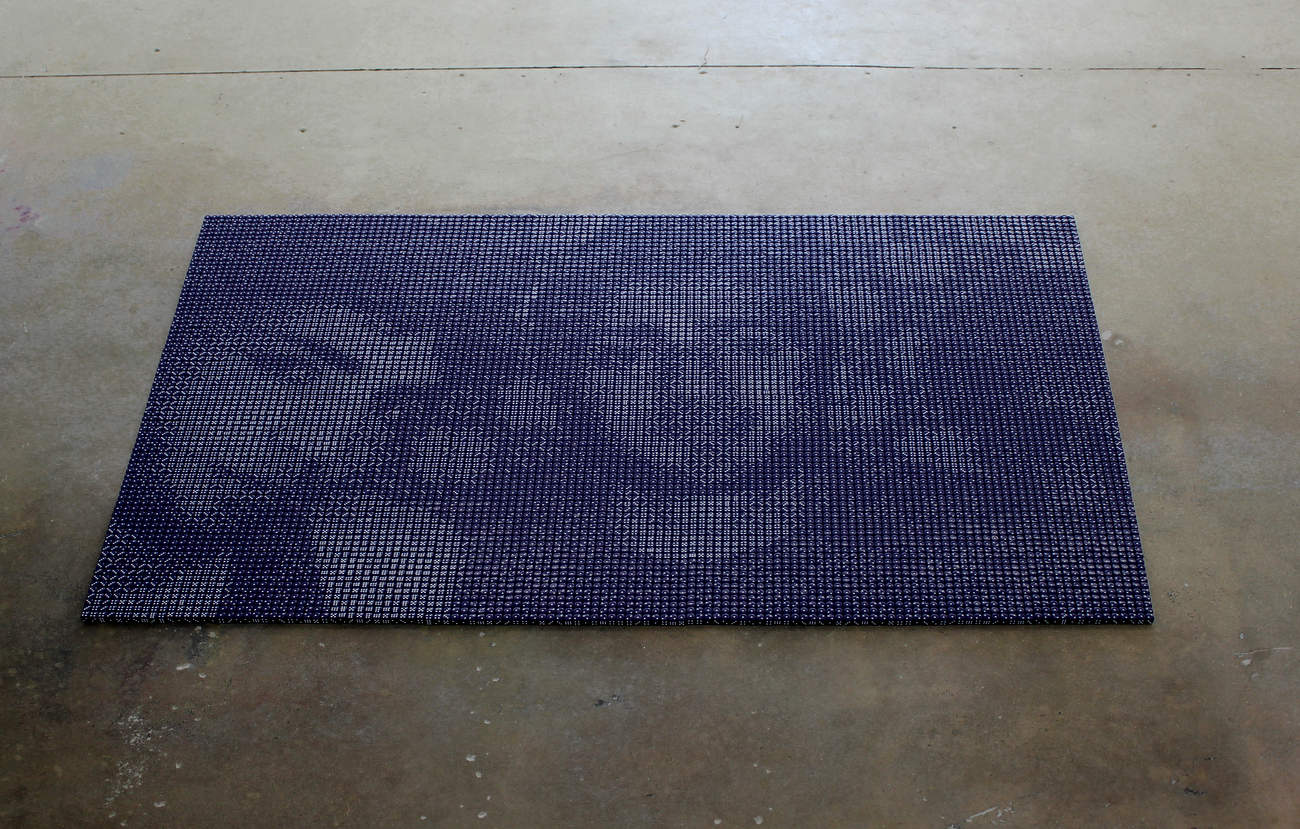 It is an imaginary portrait of how two Iranian teens would have looked today if they were born to a different culture. Mahmoud Asgari (محمود عسگري‎‎), and Ayaz Marhoni (عياض مرهوني‎‎), received 225 lashings and the death penalty 1n 2005, having sex with a male minor. They were all under the age of 18 at the time of their arrest. 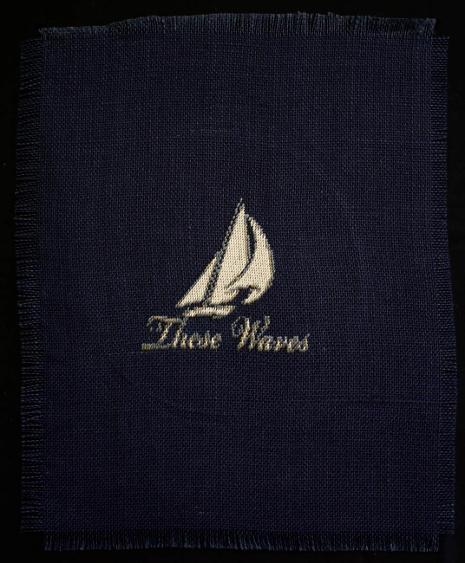 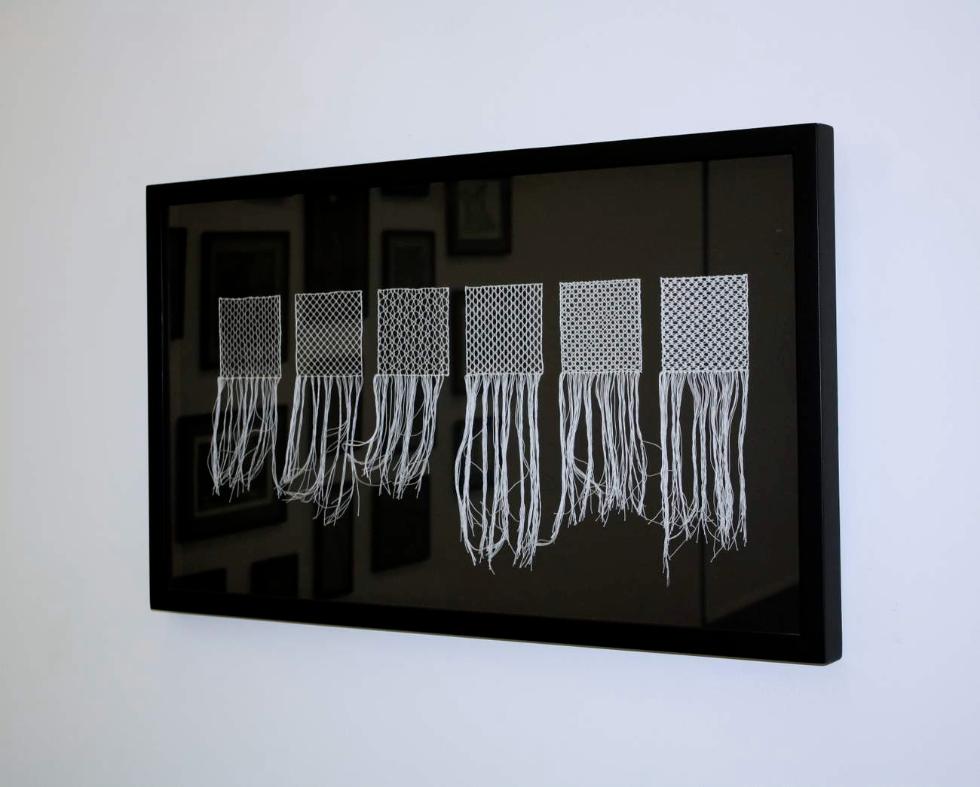 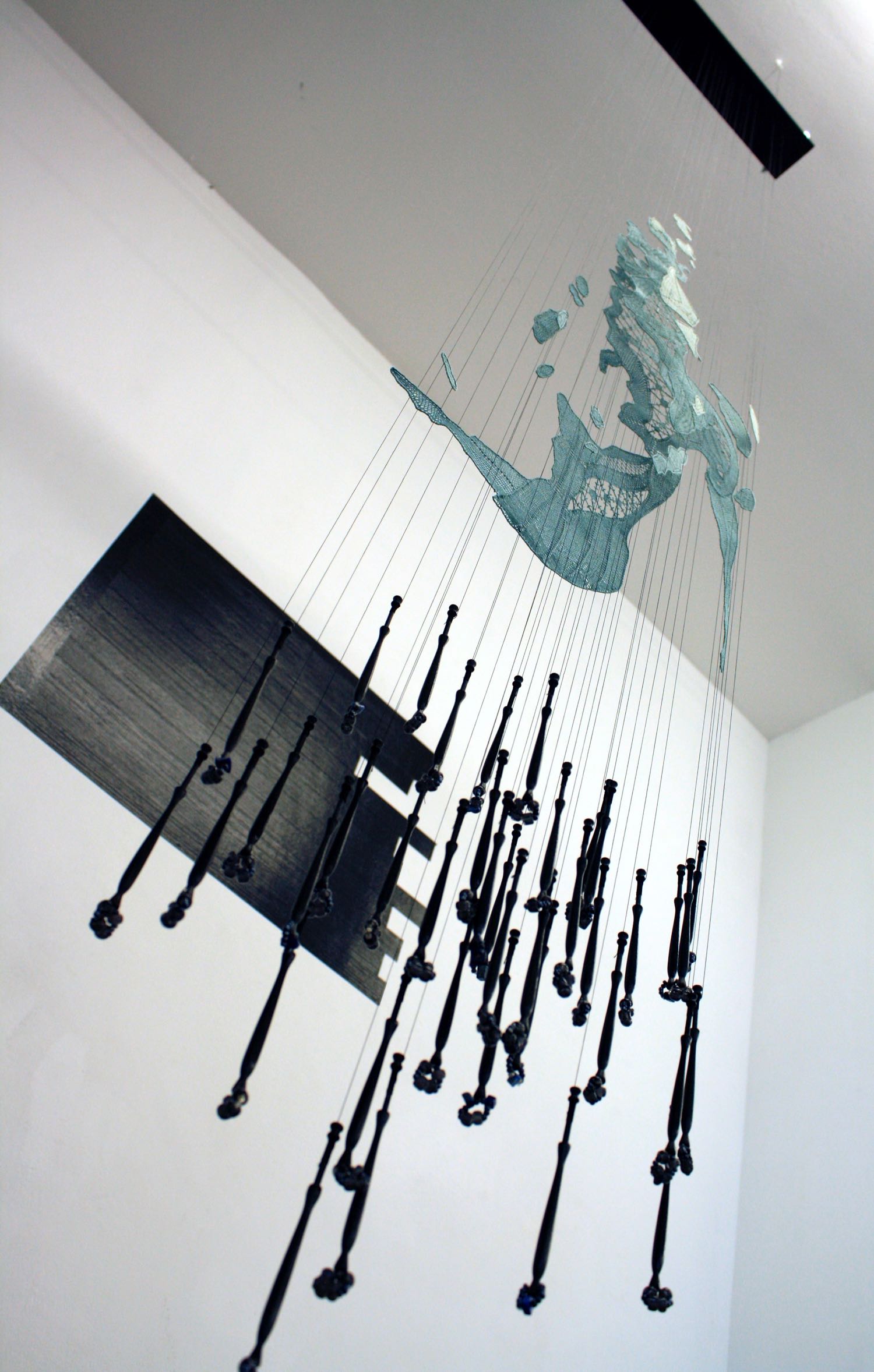 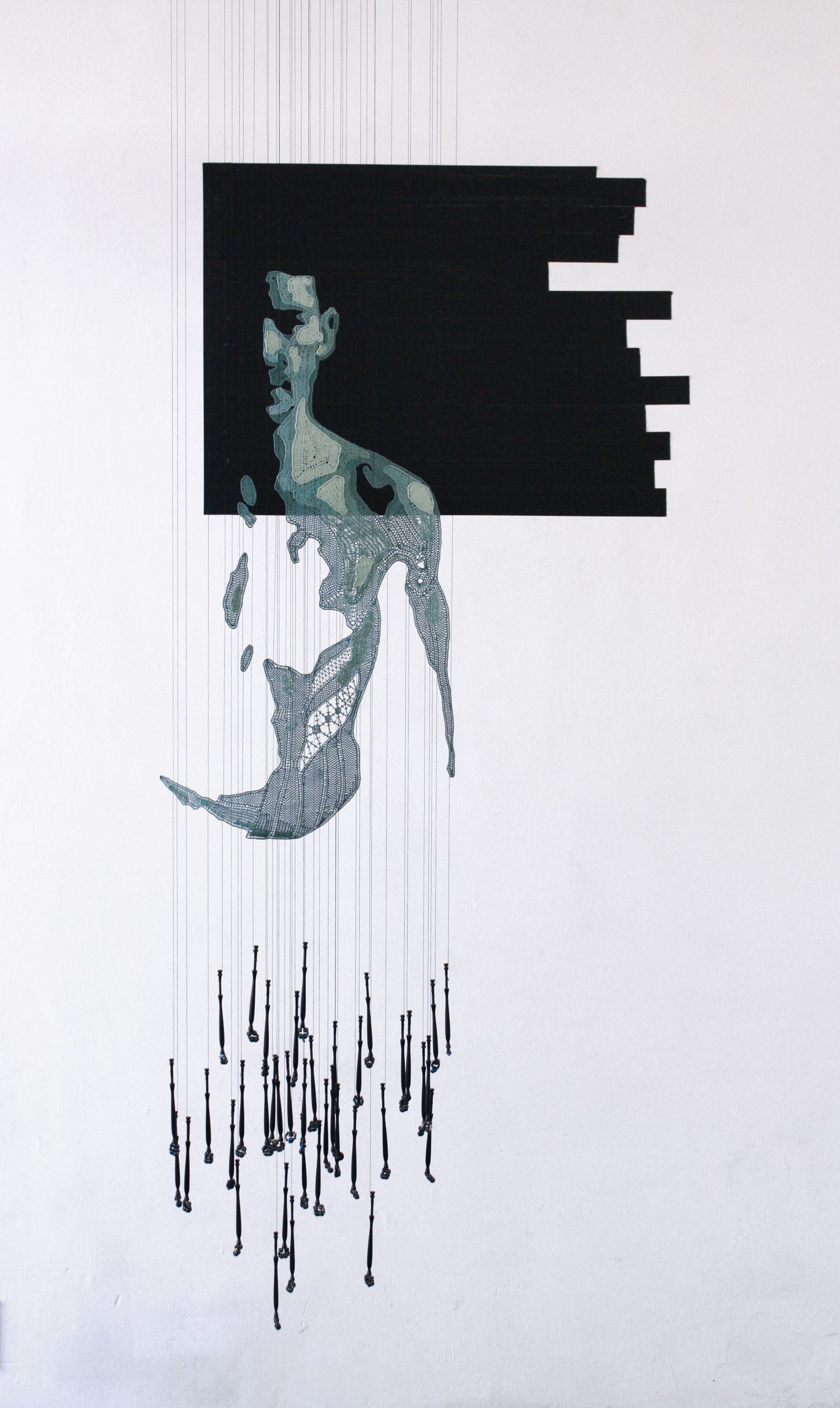 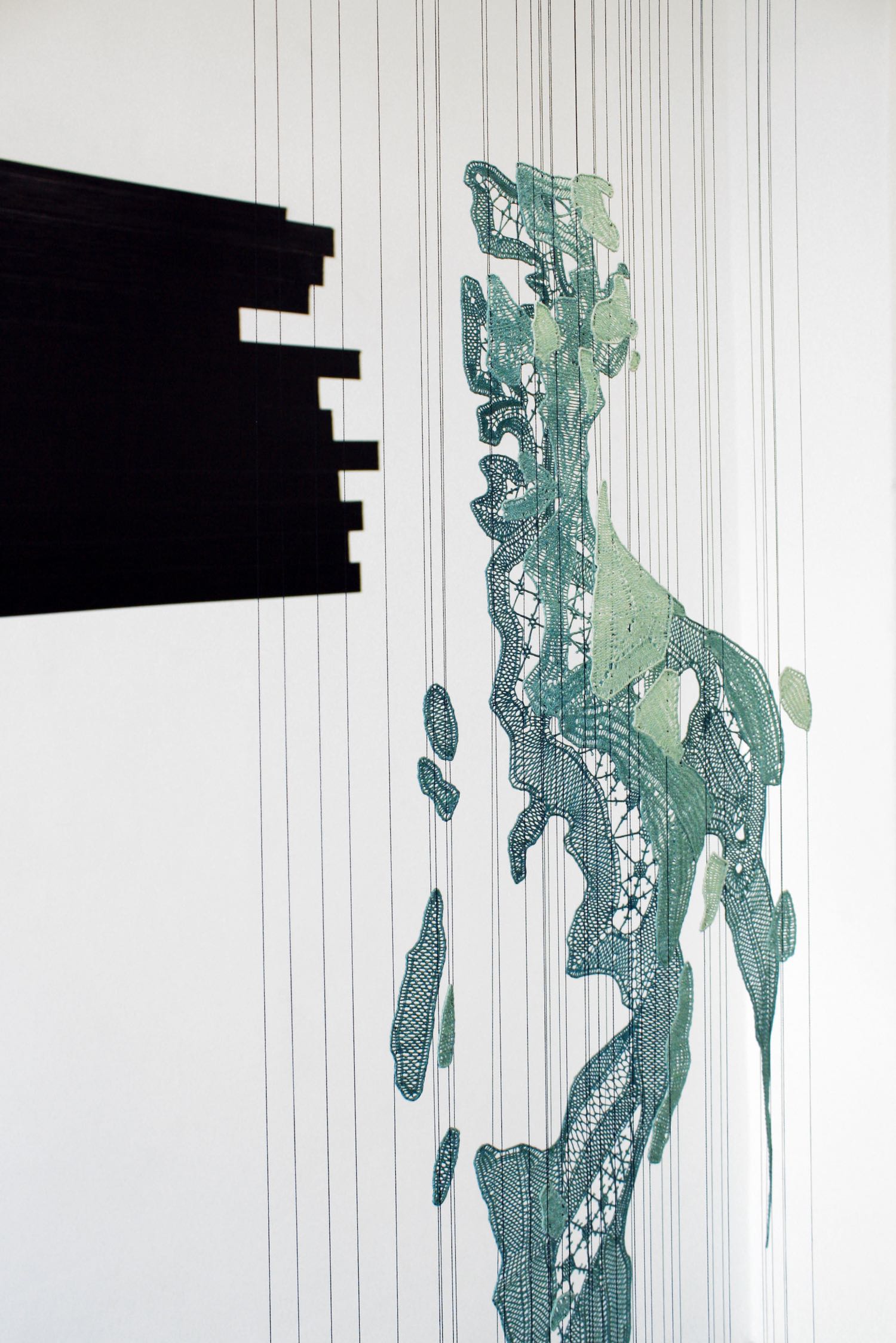 [This work, although not exhibited as part of "These Waves", set the direction for the works of this exhibition, and is accordingly grouped in this body.]

The works in These Waves take as their impetus the torrents of time and desire, a heightened awareness of mortality, and early modern experiments with optics and capturing the transience of light, weather and human consciousness:

A lace portrait pieced together using a domestic sewing machine – of an octogenarian gay man sitting in my favourite chair (Your Young Voice – A Portrait of Ivan Katzen) contrasted with a series of voyeuristic and intimate pencil drawings of seemingly solitary young men in domestic surrounds (And the walls came tumbling down).

A ‘traditional’ bobbin lace edging with the story of a sailor’s seduction and drowning encoded in the pattern (His foam-white arms go over and round me) is paired with an imaginary portrait of two Iranian youths, carefree and happy, as if their arrest and execution never occurred (Mahmoud & Ayaz).

Interspersed throughout the exhibition are pieces from a series of plein-air watercolour seascapes– each painted on a Sunday on a different Atlantic seaboard beach (Cyan Sundays) These ‘little watercolours’ are inspired by Virginia Woolf’s third-person descriptions of a coastal scene in the interludes between the character-driven chapters of her most experimental novel, The Waves (1931).

My amateur status in many of the techniques employed, as well as the marginality of some of the techniques within contemporary art (watercolour seascapes, photorealistic pencil-drawings), is analogous to the works’ ultimate status as originating from – and engaging with – the psyche of non-normative sexuality.

THESE WAVES was exhibited at Whatiftheworld, Cape Town 2 September - 27 October 2012